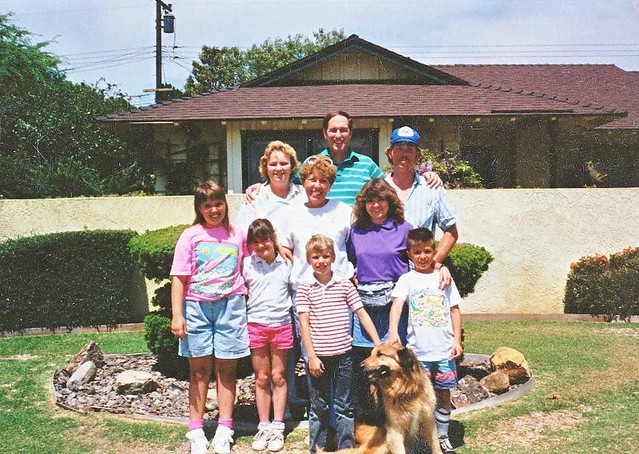 Cousins L-R in the front row : Kayte, me, David, & my little brother Jake

An oldie of my family and my cousin's family. This picture is kind of like the human version of the Country Mouse City Mouse story. Our family was living in rural Idaho and we drove to southern California to visit our family, the beach, and go to Disney. (so. many. people!) About two summers later they came to visit us and I'd like to think David had just as much fun running around the woods with my brother and his trusty bb gun. (also, at about 6 and a half feet tall, David is taller than every one of us now!)

Fast forward about 25 years and we're mostly all married with kids and real jobs and stuff like that. David's big sister Kayte & I are just six months apart in age, and have stayed very close despite usually living on opposite coasts. Our families have stayed connected through facebook and holiday cards, these guys were amazing support to me over the summer when my mom had her accident.

David started his own business this year. He and his wife poured their resources into a fully equipped plumbing truck. I loved seeing family and friends spread the news about him, getting his name out there. They are expecting their first baby in four months, and everyone was really happy to see things going so great for them.

Two days ago, his truck was stolen. Right out of the driveway of their home. Someone actually stole his job and livelihood out of his front yard. The truck was found the next day, but the $20k in tools and materials were no longer inside of it. While the truck was insured, the contents were not. My cousin & his wife were devastated. They had put everything into this new beginning. It felt impossible to even imagine how they could start over…..

That's where friends and family come in. People started reaching out, offering whatever they could to help them get back on their feet. I am such a believer in the goodness of people, and it is so amazing to see my cousin be lifted up like this. He's humble, and filled with gratitude.

I know the holidays are a time when budgets are tight, but if you'd like to make a donation to this beautiful little family, we would all so much appreciate it. The donation page is here. There really isn't an amount too small, and even sharing it in your social media world will help them out!

Thank you so much!

ps – David, I hope you don't mind the dorky picture of us as kids all over the internet. I figure if I was going to ask people for a few bucks to help you out they could at least get a laugh out of it!

pps – If their fund meets it's goal…. I will share a photo of younger self holding a guinea pig, rocking a sweet pair of1980's parachute pants. 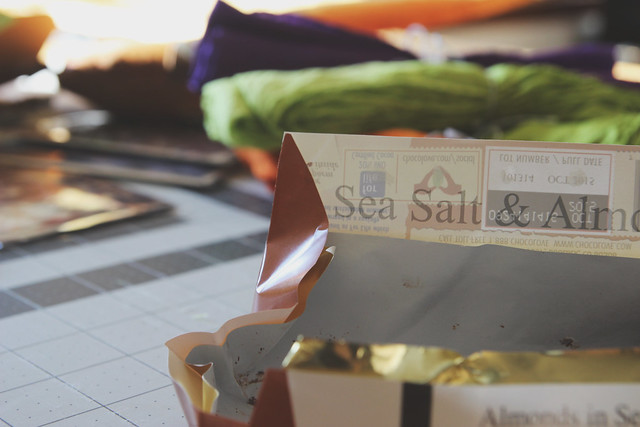 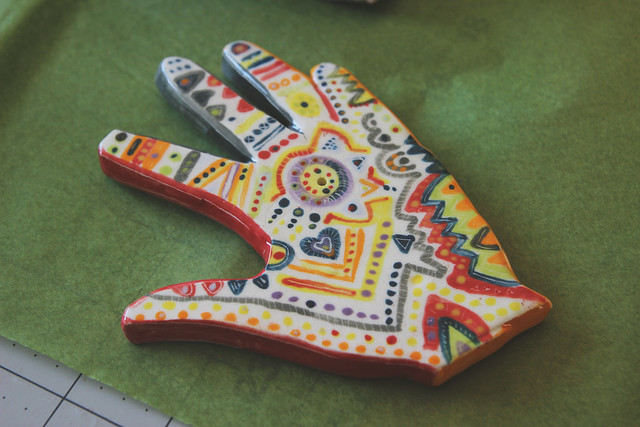 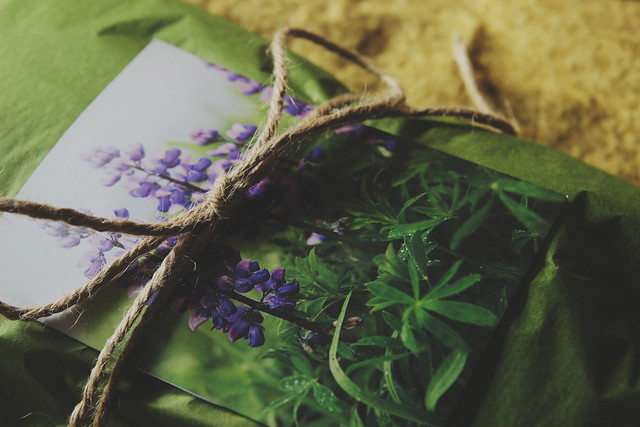 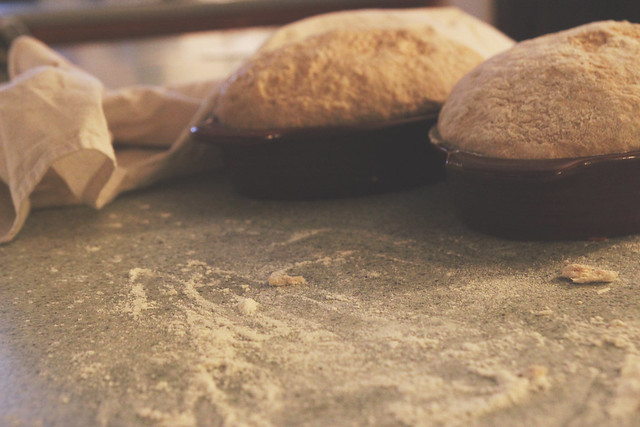 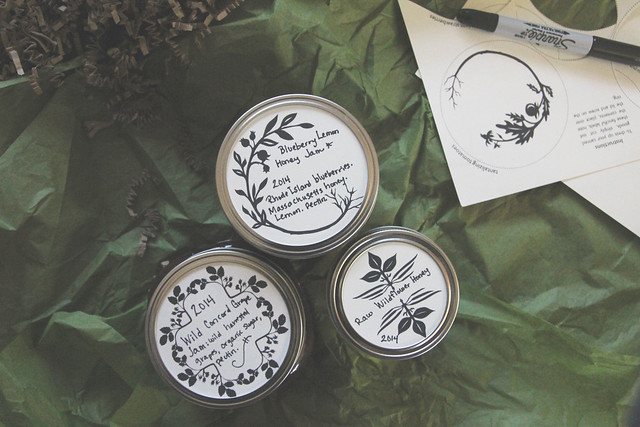 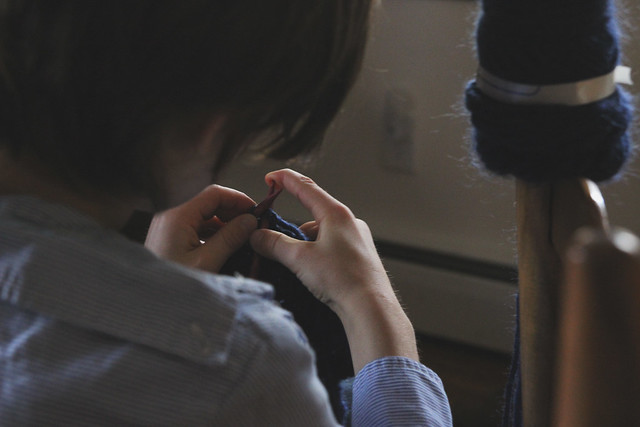 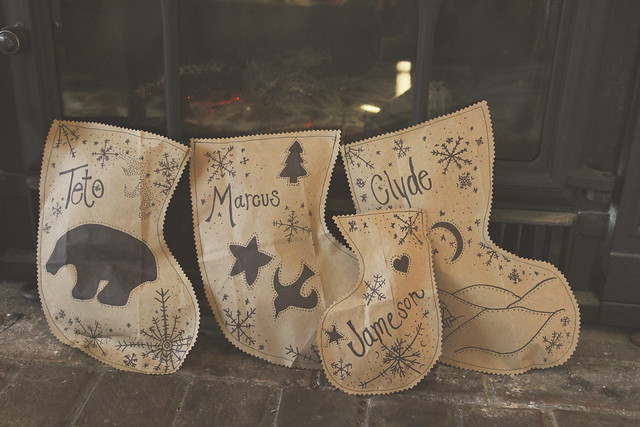 It's been such a dreary warm December.

Lots of rain and overcast days. Damp and dark.

The weather does not slow the flurry of activity indoors though. When I downloaded the photos from the camera, I smiled at all the making before me. Some of it everyday-ish, most of it holiday-ish.

Crafting, baking, wrapping. Trips to the post office. One day we sent off 15 packages!!

Most of the outgoing parcels have arrived safely, so I can give you a peek at some of what we've been doing.

Last year when my nephew visited, Joe traced his hand onto some clay. Many months later I painted it with that fun design. We tucked it aside to send to him for Christmas. His mama loved it! And I think he did too.

Lots of jars of jam, honey and salsa made their way out the door. All but one unusually tardy package has arrived. You can download those lovely labels here.

My little guy knitting. He is nearly finished with his first scarf!

And the stockings!! I may have gotten a bit carried away! I got the idea for these on pinterest. Have you seen the little paper bag advent calendars on there? I thought it would be fun to take that idea and use it for wrapping a few trinkets for my nephews. They don't read the blog, so I can tell you inside each one is some cocoa, candy, fruit snacks, lego mini-figure, and three one dollar bills folded into origami (thanks to Sophie & her friend for folding!). I drew the stocking shape onto paper bags I had cut & turned inside out. Starting at the top right, I stitched around until I got to the top left. I stuffed the goodies in and then finished stitching up the top. I trimmed the excess with pinking shears and used a black sharpie to decorate each one. (the tiny one is my new nephew, he got a little blue playsilk…. of course…. to match his favorite blue blanket).

What have you been making? Crafting? Baking?

Today I have a simple recipe for a homemade bath soak. Enjoy! 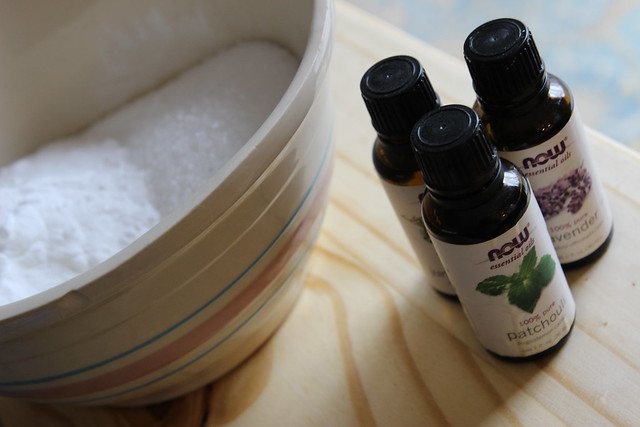 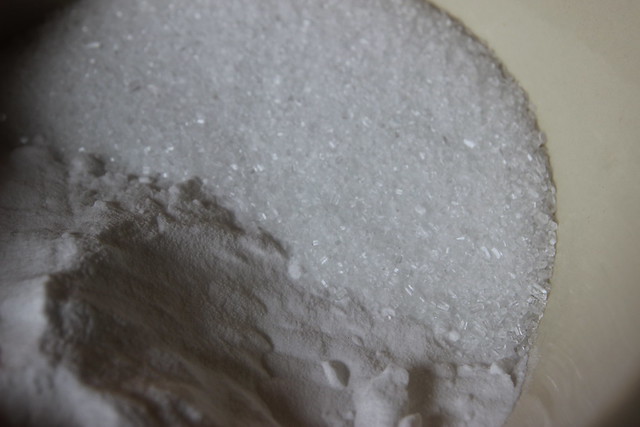 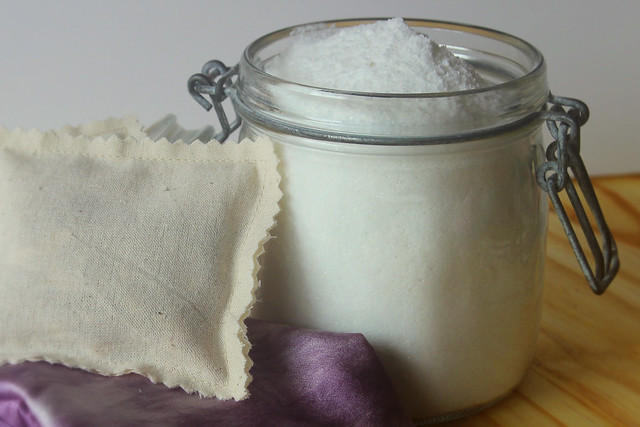 My favorite way to soak in the tub is to use this relaxing bath salt recipe. Many natural health practitioners suggest epsom salt & baking soda are gentle aids in detoxifying the body. The added essential oils in this soak further the relaxation and cleansing properties.

In this particular blend, I used a combination of lavender, juniper & patchouli oils. I found this on pinterest to give you some more ideas and I just added to my essential oil collection this winter with this company (lots of good recipes on how to use oils on their blog too!) Now, on to the recipe…..

Mix the epsom salt & baking soda together, breaking up any clumps of baking soda as you mix. Slowly add the essential oil, mixing well after every ten drops. I use a metal spoon to gently break apart any clumps of oil. Mix until you no longer see any clumps. Store in an airtight container. I use 1/4 to 1/2 cup per bath.

Don't forget to keep some for yourself!

As I type this up I hear a rather serious conversation in the next room while the biggest kid (he's 18, can I still call him the big kid?) cleans up from dinner. The youngest two are discussing some very crucial details of Star Wars. That's the benefit of having someone trapped in a room with a job to do….. absolute attentiveness….. 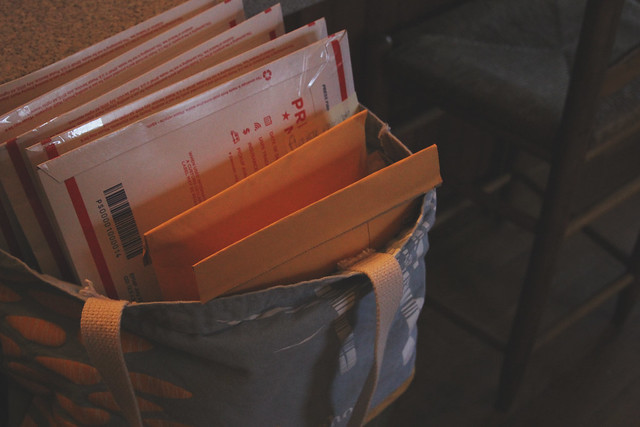 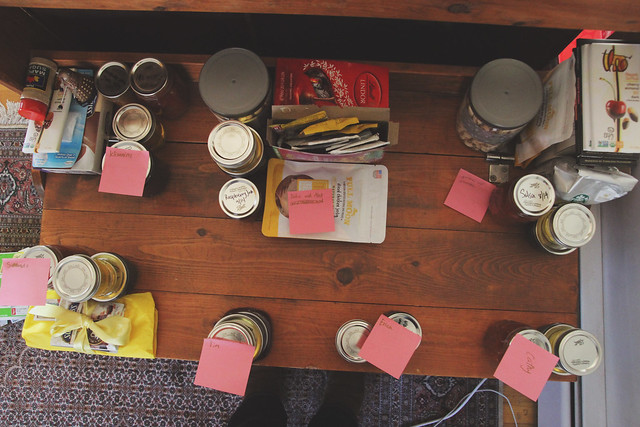 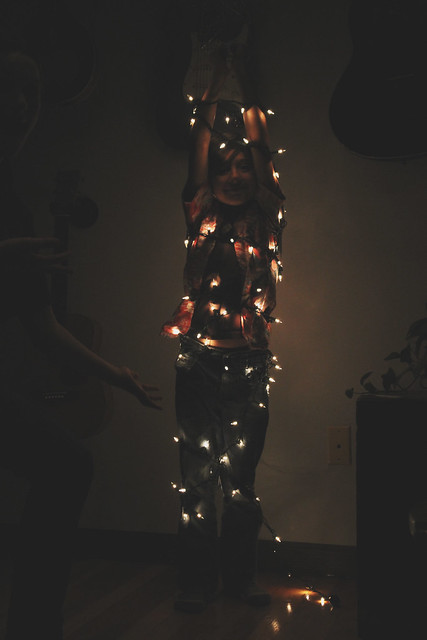 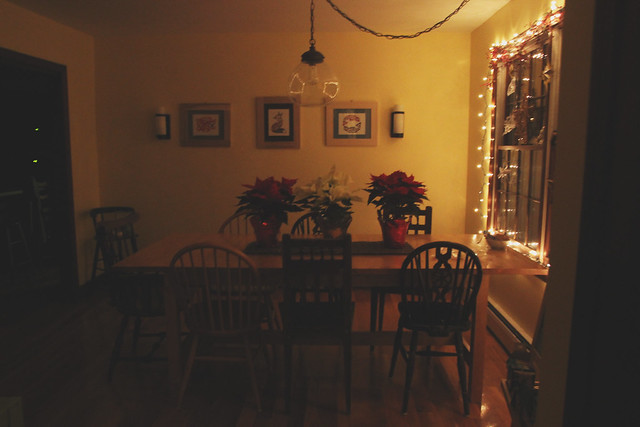 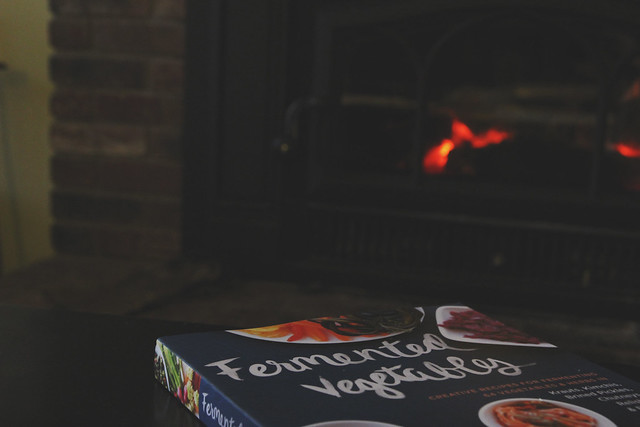 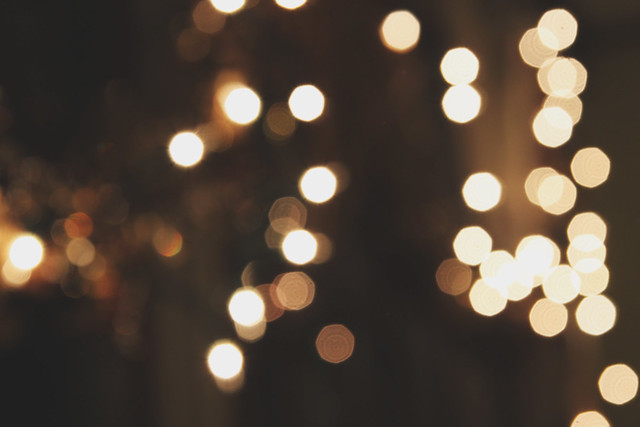 There is a constant stack of packages outgoing. Especially this time of year, I do love sending bits of things I made to other happy little homes. It's like being part of the magic… if that makes sense. Both the things going out via shop sales and gifts to family and friends. Tiny jars of honey making a debut. I hope they all know how special those are….

Another peek of the dining room…. someday the rain will stop and I'll show you around officially. But you can see some fresh lighting and the frames Joe built. And twinkly lights. They're everywhere. Along windows. Banisters. Strung around little brothers when no one is looking….. ahem.…

I updated the book list for you. Our favorite winter books. Do those links work? Sometimes I click them and nothing happens… not sure if that is the deal for everyone. And speaking of books…. evenings by the fire while reading has been such a beautiful ending to the busy days we've been having. Freshly second hand from Amazon is this gem. Loving it a whole, whole lot!

And did I mention how I swoon over those twinkly white lights?

Happy evening to you all…. 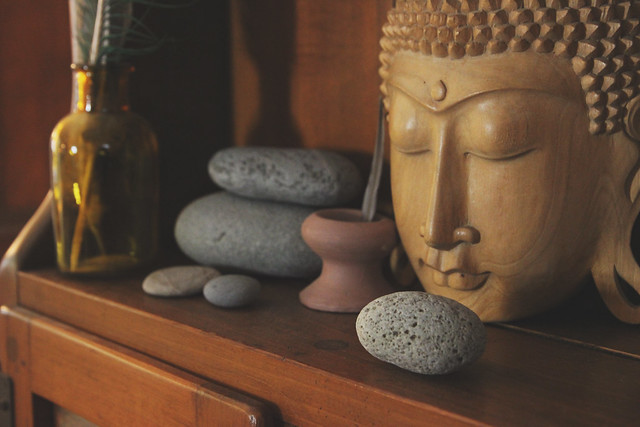 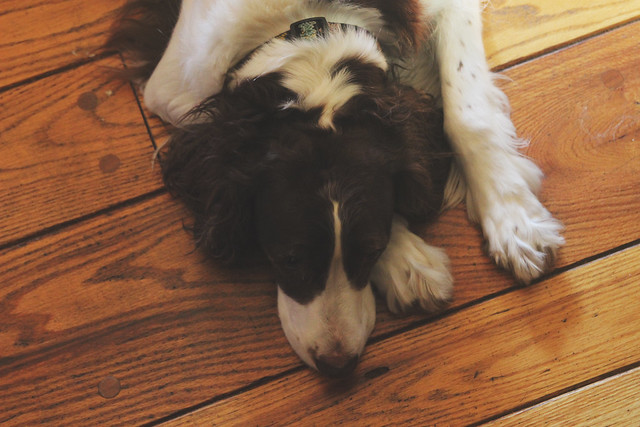 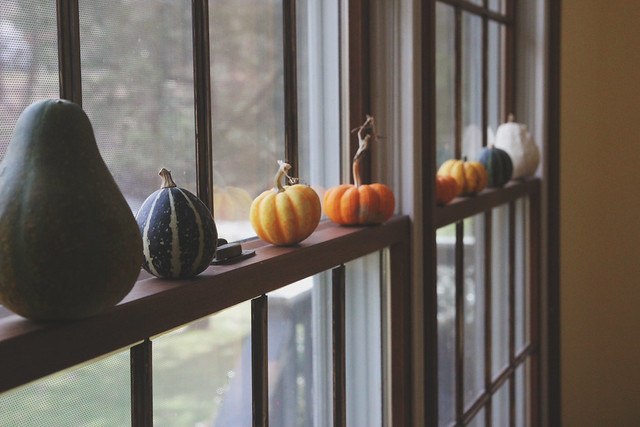 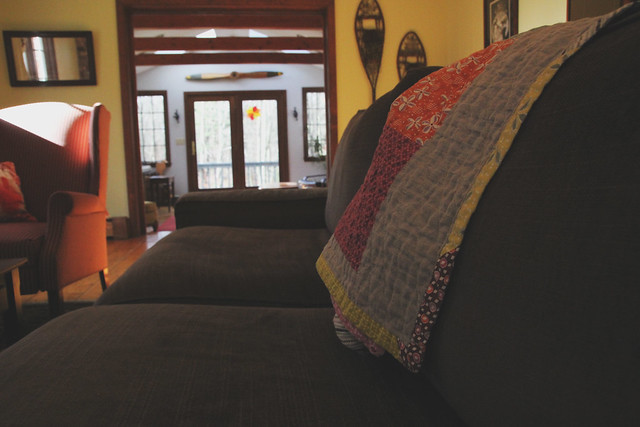 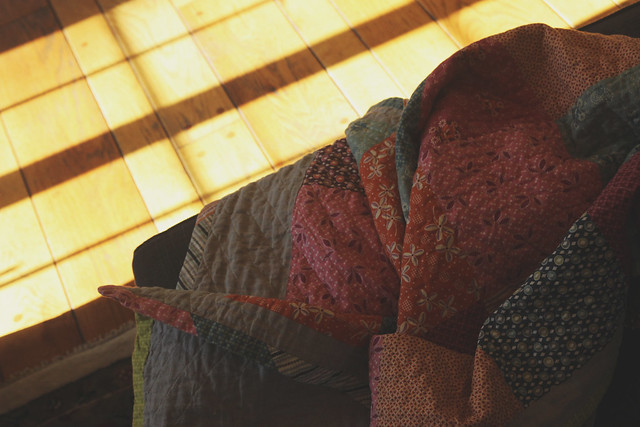 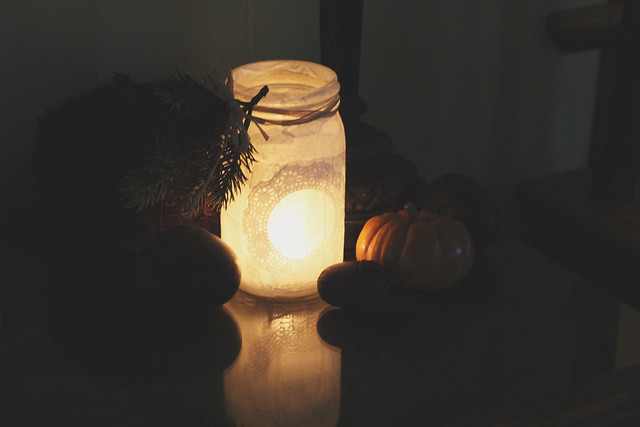 I love the light this time of year.

Once the leaves fall from the trees the usually dark living room has a soft glow early afternoon each day. Only for a few hours. The crooked shadows of naked trees branches along the floor.

This shift from fall to winter is a favorite, like all of them I suppose. The excitement of the holidays. And snow. The wood stove on and off until finally it is roaring full time to keep the house toasty. We moved the couch in front of it this year. We all pile into the chairs and onto it and sit around the fire. The heat seekers of us sit right on the hearth ledge until we can't take it anymore. Luke does this and then plunges his warm little body into my lap.

"I'm a human warmer upper!" he tells me.

The pumpkins have been leaving the house, bound for the chicken coop. Making way for the Christmas decoration boxes that have come out. The white lights are going up and there is a furry of paper cutting.

If there is no snow outside, they say, they will make it themselves.